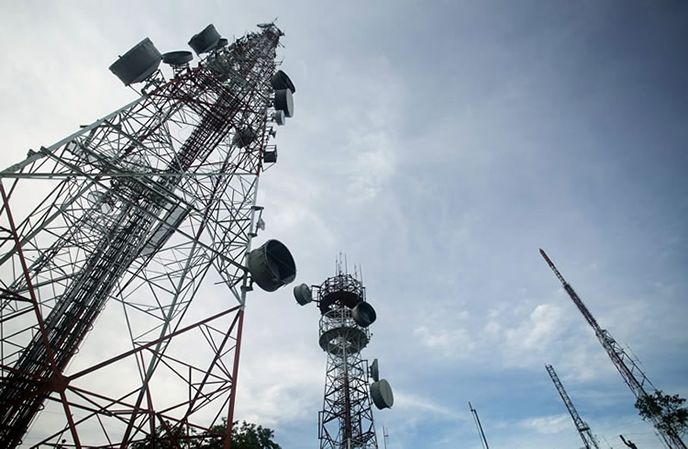 4G is all the rage these days and at this point most people probably know that it’s faster than 3G, but there’s a whole lot more to it than that. So for a rundown of all the benefits, how to get 4G, exactly how fast it is and what the future holds read on, because we’ve got an easily digestible guide to everything you need to know.

2G technology launched in the 1990s and was capable of making digital phone calls and sending texts. Then 3G came along in 2003 and made it possible to browse web pages, make video calls and download music and video on the move.

4G technology builds upon what 3G offers, but does everything at a much faster speed.

What are the benefits of 4G?

The benefits of 4G fall firmly into three categories. These are: 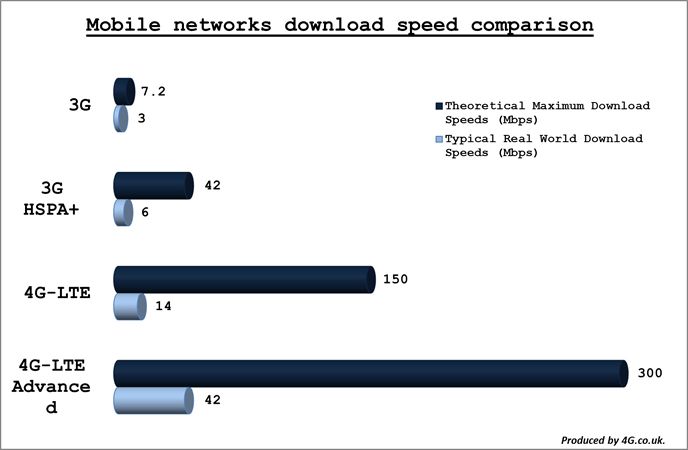 Standard 4G (or 4G LTE) is around five to seven times faster than 3G, offering theoretical speeds of up to around 150Mbps. That equates to maximum potential speeds of around 80Mbps in the real world (though even getting speeds that high is rare, and generally requires something like EE’s ‘Double Speed’ or BT Mobile’s ‘Extra Speed’ service). 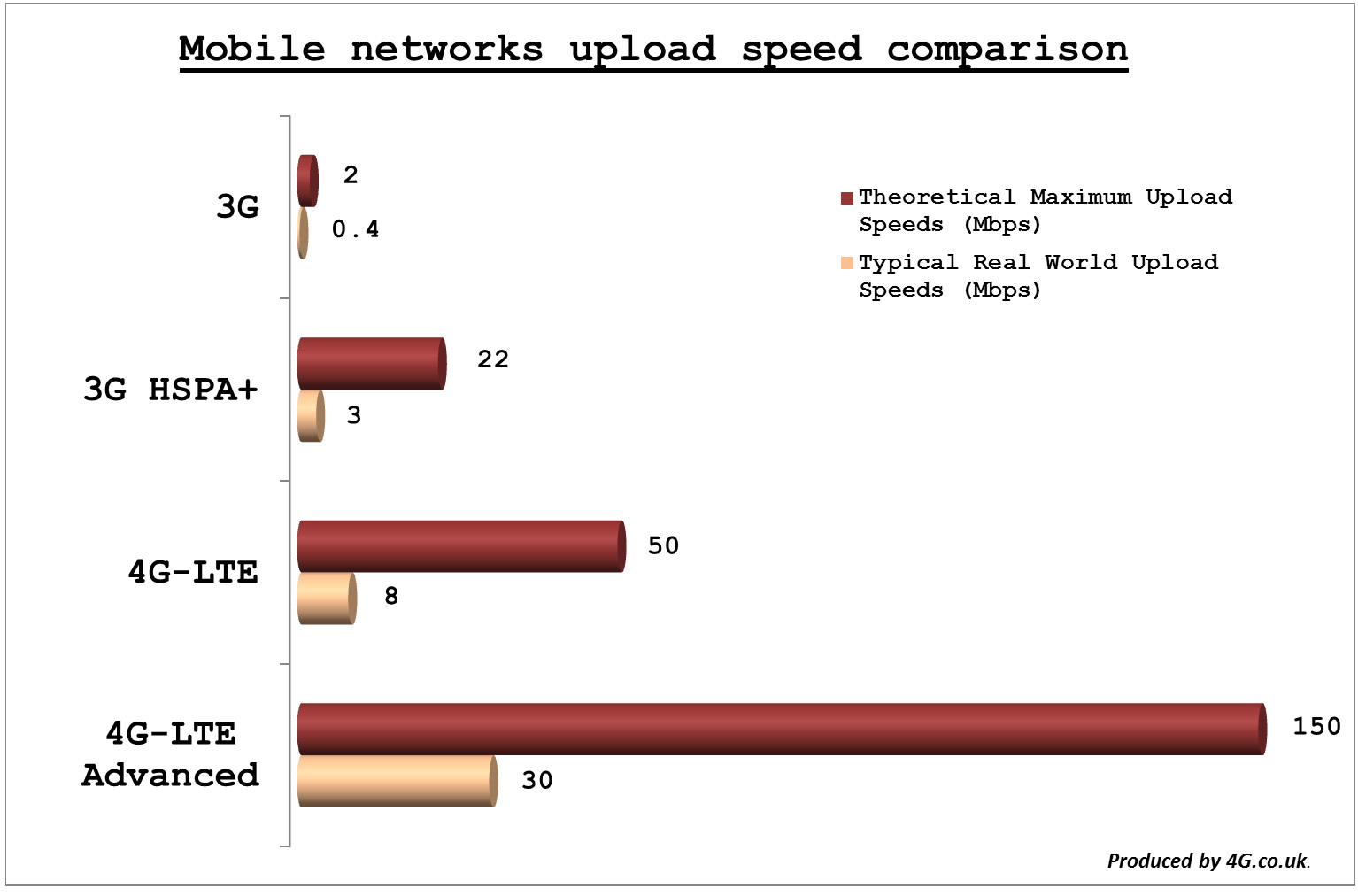 However, a new even faster version of 4G is already available in many parts of the UK called 4G LTE-Advanced (also known as LTE-A, 4.5G or 4G+).

This offers theoretical speeds of up to 1.5Gbps, but the current crop of LTE-A networks have a maximum potential speed of 300Mbps with real world speeds falling a lot lower. EE has brought LTE-A to Greater London (calling it 4G+). You can expect consistent 4G+ coverage across London and the network is now working on bringing it to other cities, including Liverpool, Manchester and Birmingham. These places and many other towns and cities now have partial LTE-A on EE.

EE isn’t the only network with LTE-A though, as Vodafone has also brought it to London, Birmingham and Manchester.

Most recently, Three has launched a 4G+ service of its own, promising average speeds that are 15% to 33% higher where available. The network hasn’t provided a full list of 4G+ locations but has said that it’s been launched in high-demand cities such as London, Birmingham, Cardiff, Edinburgh and Glasgow. You’ll know it’s working where you are if you see a ‘4G+’ symbol on your phone.

You can expect the availability of LTE-A to increase in the coming years and speeds could get faster still. For example, Ericsson has developed technology which could allow for peak real-world 4G speeds of 1Gbps, though this won’t likely be available for a while if at all.

Then there’s 5G, which is already being developed and there are aims to start rolling it out in 2019 and deliver drastically faster speeds than you could ever hope to see on 4G. Current estimates put download speeds over 5G at anything from 1-10Gbps. 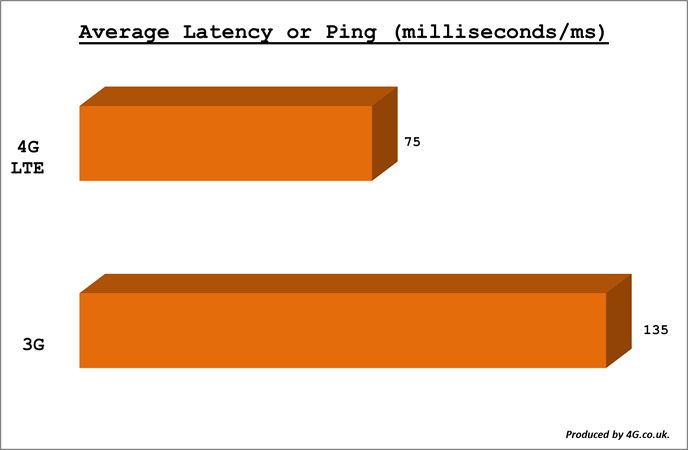 The improved latency times, reduced from 120 milliseconds (3G) to around 75 milliseconds (4G), may not seem that significant on paper.  However, they can make a significant difference when playing online games and streaming live video. Find out more about the benefits of 4G for gaming.

Voice over LTE (VoLTE) is similar to Voice over Internet Protocol (VoIP), which use voice apps such as Skype to support voice calls over the internet. Effectively, VoLTE rides on the back of the 4G network and brings crystal clear voice calls and video chat to your 4G mobile phone.

Another benefit is that it allows you to call and text when you only have a 4G connection, where previously you wouldn’t have been able to.

VoLTE is now available from Three, EE, O2, Vodafone, iD Mobile and BT Mobile, but only on certain handsets. Check out our full VoLTE guide for detailed information on availability.

We mentioned above that 5G will deliver even higher speeds than 4G, and in preparation for that Ofcom recently auctioned some spectrum earmarked for 5G use, but at the same time it also auctioned additional 4G-ready spectrum, so some operators may be able to strengthen their 4G networks.

Or rather, one operator may be able to, as 40MHz of 2.3GHz spectrum was auctioned, and O2 came away with all of it, while EE, Three and Vodafone focused exclusively on the 3.4GHz spectrum that’s to be used for 5G.

It’s not clear exactly how much difference that spectrum is making, but O2 (along with the other major networks) is continuing to improve its 4G network, with a recent focus on rural areas.

Don’t worry if you’re not on O2 though, as even with that auction win it still only has 126MHz of 4G-ready spectrum in all, while Three has 130MHz, Vodafone has 176Mhz and EE has 255MHz.

Which Networks Offer 4G in the UK?

The four main UK mobile operators (EE, Vodafone, O2 and Three) currently offer 4G in the UK. Coverage and speeds differ between the operators, but they all have an active 4G network and offer 4G tariffs to their customers.

There are other 4G operators, called Mobile Virtual Network Operators (MVNOs), who essentially piggyback onto the main 4G mobile operators’ networks and offer their own mobile services. These include Tesco Mobile, Sky Mobile, Lycamobile, and GiffGaff, which all use O2’s 4G network, iD Mobile, SMARTY, Ctrl Mobile, The People’s Operator and FreedomPop, which use Three’s network, VOXI and Lebara, which use Vodafone’s network, and BT Mobile, ASDA Mobile, Virgin Mobile and Plusnet, which use EE’s 4G network.

In other words, just about every UK network offers 4G and it comes as standard.

There are a number of things that need to be checked or done for you to get 4G on any device. These are:

Is 4G available in your area?

Firstly, you will need to either check online or ask your mobile operator if they have launched 4G in your area.

Each of the 4G mobile operators has a “coverage checker” which works from the post code you put in and this should be your first port of call (see below for links to each operators coverage checker).

If there is any doubt call your operator and they should provide further assistance. There are two types of coverage you should check for – indoor and outdoor.

We have produced a comprehensive 4G coverage and network summary for most UK networks. Links to these below.

If your mobile operator doesn’t currently offer 4G in your area, the next step is to ask the operator when they will be launching 4G in your area. If you’ve got a long wait ahead or your network won’t reveal when it’s bringing 4G to your area then you still have the option of jumping ship to another operator.

Do you have a 4G Ready phone?

The second thing you’ll need is a 4G Ready phone. You’ll probably already have a phone which is compatible with 4G, as most smartphones are 4G compatible. If in doubt you should head over to the phone manufacturer’s website and check your device’s specification.

Don’t have a 4G phone? No worries, there are plenty of 4G smartphones available which can picked up on Pay Monthly tariffs, SIM-free or on Pay As You Go and these cover a range of costs and device types, from entry-level handsets to flagships and from compact to phablet.

This shouldn’t be an issue as just about all plans on all networks now come with 4G as standard. If you’ve stuck with the same plan for many years then there’s an outside chance you won’t have 4G (though your network will quite possibly have added it to the plan anyway), but in that case you should be eligible to switch to a new plan by this point anyway. So, if in doubt give your network a call and check out your options.