This article is more than 2 years old.

Goncalo de Vasconcelos: Why do you think we are at the beginning of the third Industrial Revolution?

David Brown: Three main factors drove the first and second Industrial Revolutions: a new energy source, a new communication system and a new financial system. We may be observing the same three main factors once again.

de Vasconcelos: How did the three main factors impact the First Industrial Revolution?

Brown: In the First Industrial Revolution, which came out of England, the new energy source was the change from wood power to coal power, a much more energy-dense source, leading to steam powered boats and trains. In fact it led to industrialisation via machines and fast mass travel opportunities. The new communication system was the steam-powered printing press which gave cheap papers and magazines delivered rapidly via trains to homes and shops. And it enabled mass education for the first time – what a transformation for humanity! The new financial system was the London stock market. This generated the finance to support development of the other two factors. In fact all three factors synergised in ways that could not be easily predicted.

de Vasconcelos: What about their impact on the Second Industrial Revolution?

Brown: In the Second Industrial Revolution, driven by technological advances in the UK, USA and Germany, oil replaced coal, again much more energy-dense. Electricity was developed from breakthroughs in basic physics out of UK universities which led to the new communication system, the telegraph then the telephone, and electrification of cities and homes driven by Thomas Edison in the USA. Together, oil and electricity led to development by Daimler and Benz in Germany of the internal combustion engine, then highways and all the transport we take for granted today. And the new financial breakthrough was the limited liability corporation which reduced risk to individuals engaged in entrepreneurial activities. Everyone will recognise we are still using most of these, and that some have become problematic and need replacing.

de Vasconcelos: So where are we in the Third Industrial Revolution?

Brown: We clearly have the new communication system, the internet, and I suggest we can reasonably date the beginning of this industrial revolution to the mid 1990s when desktop PCs became linked for the first time by Tim Berners-Lee’s World Wide Web and Marc Andreesen’s Mosaic MOS +0% / Netscape system. The internet is well ahead of the other two factors. The new energy source looks very likely to be predominantly solar power. The new financial system is less advanced, but internet-driven breakthroughs such as crowdfunding and peer-to-peer finance are indicating a democratisation of finance. People-driven finance is beginning to catalyse progress in other Third Industrial Revolution technologies. 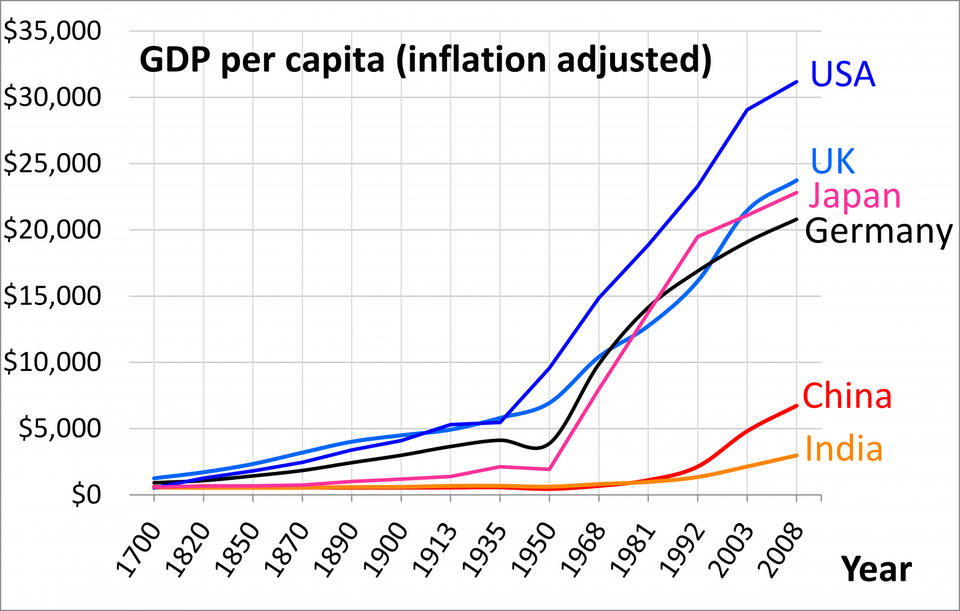 Japan Is Pioneering Machine Interfaces That Are Hardwired For Kindness

How To Build A Culture Of High Expectations

How UNICEF Supports Families To Prevent Child Labor In Madagascar

de Vasconcelos: So what will the Third Industrial Revolution impact the most?

Brown: Eventually everything, but the early movers have been USA-led computing, IT, internet companies and social media sites, which have grown to global behemoths faster than ever in history. These in turn have driven biotechnology as the genome at last begins to impact. Both went through a hype phase in the 1990s, then a bust, then the real winners emerged. That is a typical pattern over the initial 15-20 years of a breakthrough technology. Solar power has been driven mainly by Germany and more recently China, though the USA is catching up fast. Current solar systems have only 10-20% efficiency in sunlight capture but new materials will take this into the 50-100% range very soon now. And battery storage technology is advancing rapidly.  Additive manufacturing (aka 3D printing) will replace our old material and energy-wasteful methods. Robotics is beginning to spread out of factories with Japan, Germany and China leading the charge, though expect the USA to catch up and contribute to innovation. Nanotechnology will mature in the 2020s. The Internet-of-Things is a few years away, and it will probably drive the next phase of healthcare advances, but needs more stable internet, better security and cheaper components before it can take off. And machine learning /AI will be a game-changer for humanity, beginning to impact within the next decade. The new finance is now appearing through Africa-led mPesa, followed by Google GOOGL +0%-wallet and Apple-pay etc. The US internet giants are registering as banks, they have very cheap infrastructure and billion-size customer bases and are likely to challenge patriarchs of the current financial system. There is much innovation in finance in the UK too. We see positive deflation all over the world as a result of these lower-cost and more-efficient solutions to human needs.

de Vasconcelos: So where are we in the Third Industrial Revolution?

Brown: Industrial revolutions take decades to play out. We have barely started in this one. Remember that the first and second Industrial Revolutions involved only Western Europe and its off-shoots, whereas this one is truly global. And online education is available to everyone for the first time ever. OECD projections indicate the world will become about 10 times wealthier during this century, and these advances certainly support their case. Exciting times!